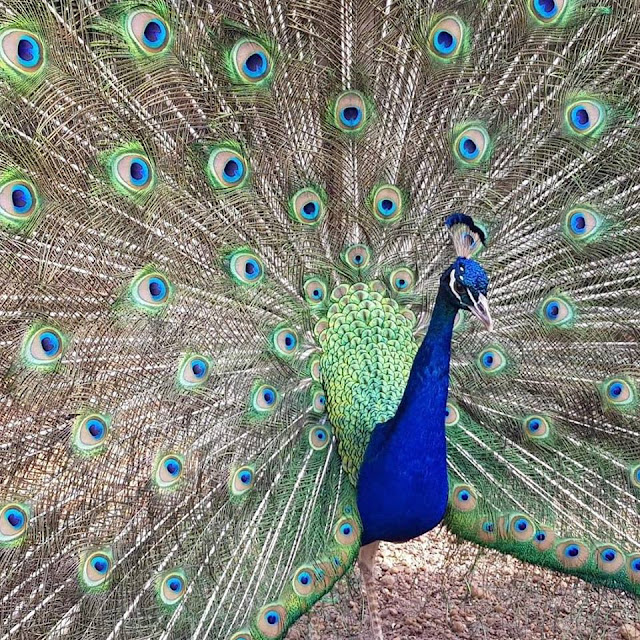 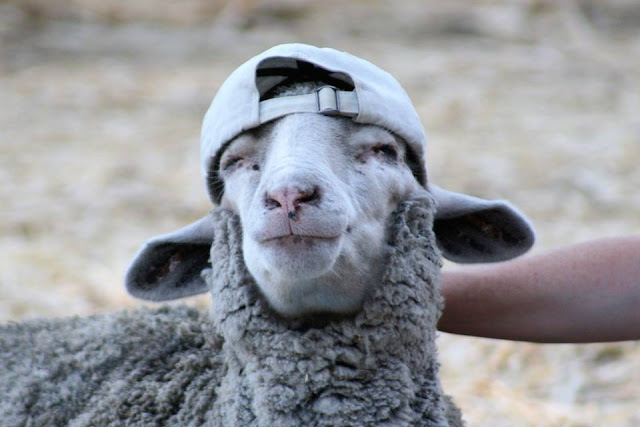 To find out more or to book, visit our Events listings on Facebook:
https://www.facebook.com/possumvalleyanimalsanctuary/ 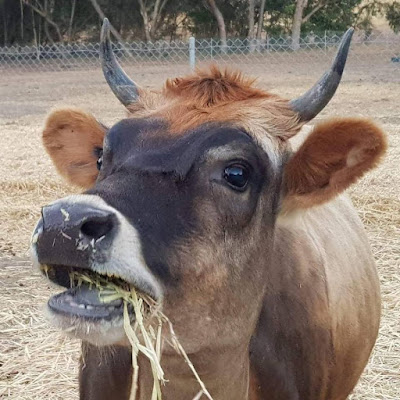 Posted by PossumValleySanctuary at 04:36 2 comments: 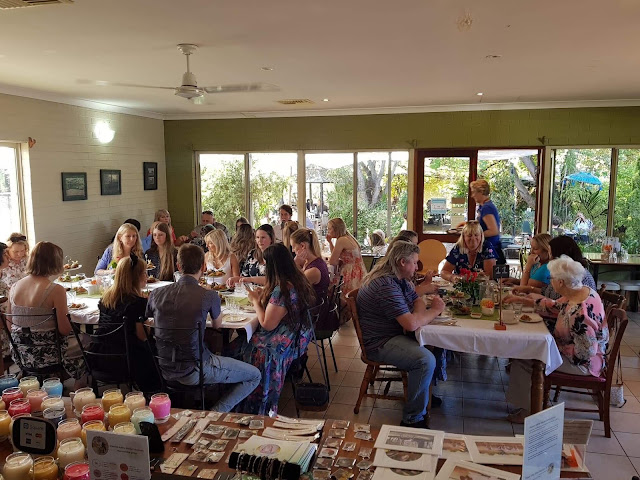 On Sunday the 3rd of February, Possum Valley held a Summer High Tea Fundraiser at Swan Valley Café. The event sold out quickly, with many Sanctuary supporters keen to enjoy a morning of cruelty free gourmet fare at the beautiful garden café while helping raising much needed funds for the animals. 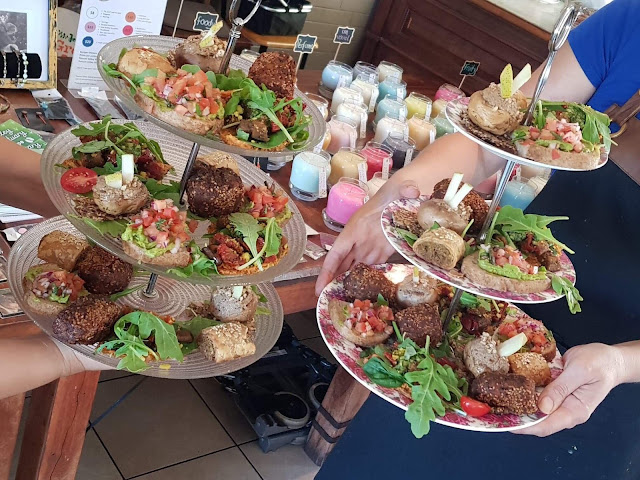 A selection of both savoury and sweet treats were served throughout the morning, including delicious antipasto tarts, loaded avocado and tomato bruschetta, savoury muffins, banana cake and berry slice. 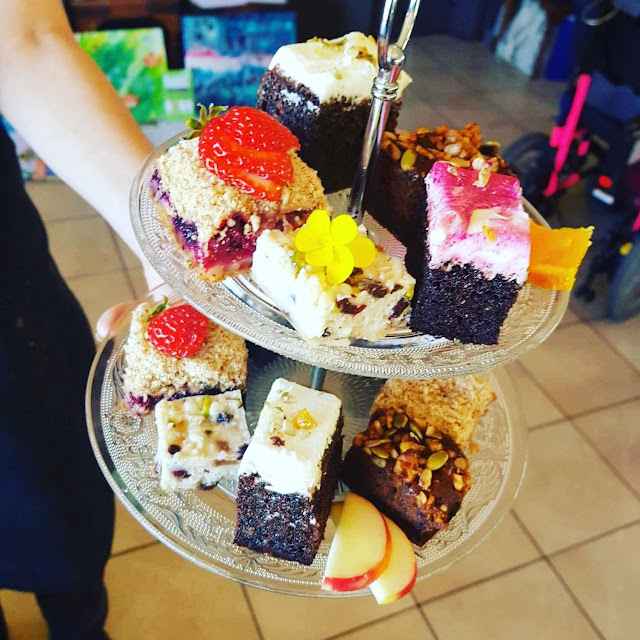 Friends of the Animals gifted us a beautiful hamper for a raffle and a number of people donated silent auction items – all were very popular and raised money for the Sanctuary. 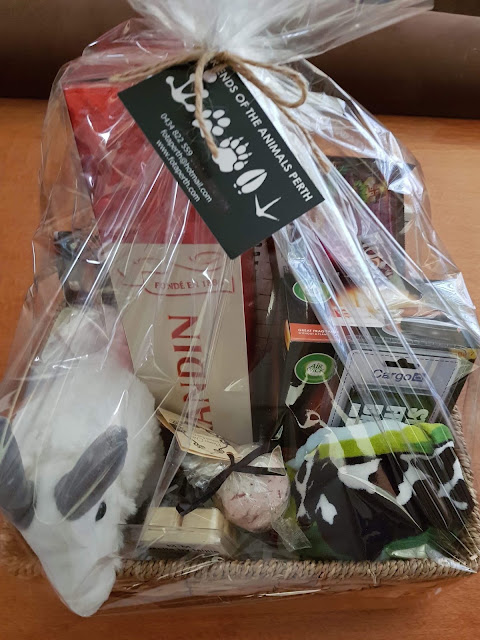 Thank you to the amazing staff at Swan Valley Café and to all who attended and supported the event – we hope you enjoyed it as much as we did. To find out more about Swan Valley Café see: https://www.swanvalleycafe.com.au/
Posted by PossumValleySanctuary at 04:24 No comments: 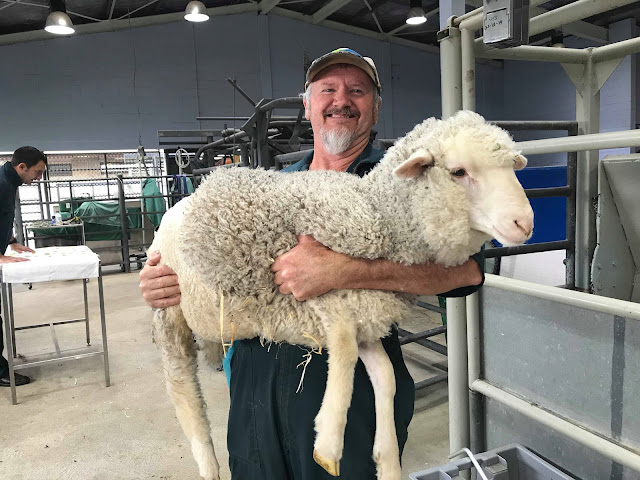 Little Cleo Lamb came into the care of Possum Valley following a vicious dog attack. She was a loved pet, but badly mauled one night by a dog, causing significant wounds on her leg, side and face. Seeing her pain, her owners reluctantly organised euthanasia at a local vet. We asked that Cleo be surrendered to the Sanctuary in the hope she could be saved. Her owners agreed and we organised an emergency trip to our specialist sheep vets at Farm Animal Services at The Animal Hospital, Murdoch. The vet team were ready and waiting for Cleo, providing pain relief, fluids and tending to her wounds. She was stabilized and closely monitored, as shock had set in following her ordeal. 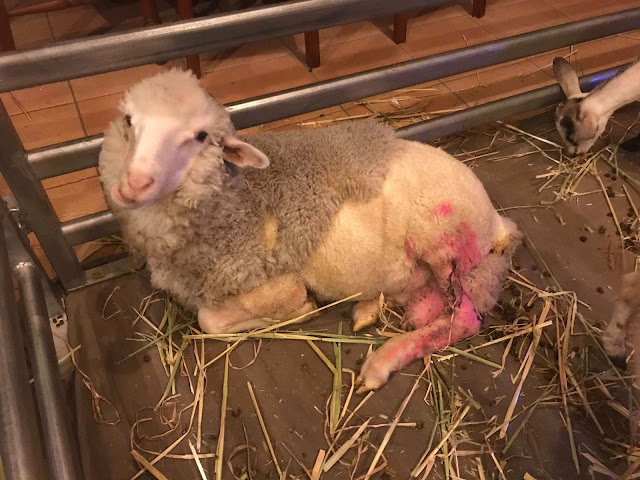 It was an anxious wait overnight to see if Cleo would recover from the trauma of the initial attack. Come morning, the vets arrived to find that Cleo had chewed out her drip line and escaped her pen. This change in demeanor in her short time in care was signal to us that Cleo was not giving up. At only six months old, she had made a decision to live and we were determined to help her. 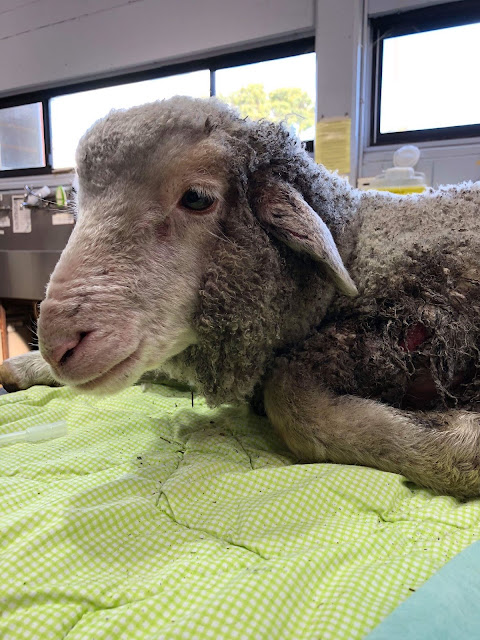 While Cleo recovered from shock, her back left leg had been ‘degloved’ of skin, which required daily dressings and pain relief for many weeks. She also had a serious puncture wound on her shoulder and her ears were ripped. The vets met with us, explaining the lengthy recovery period which Cleo faced. We had some important questions to consider before we agreed to continue with treatment - Was she suffering? Would she make a full recovery? Would her quality of life be restored? Once we were confident that all of these were possible, we embarked on our ‘Caring for Cleo’ journey. The vets began planning her treatment and we commenced a full scale fundraising campaign to make these efforts possible. 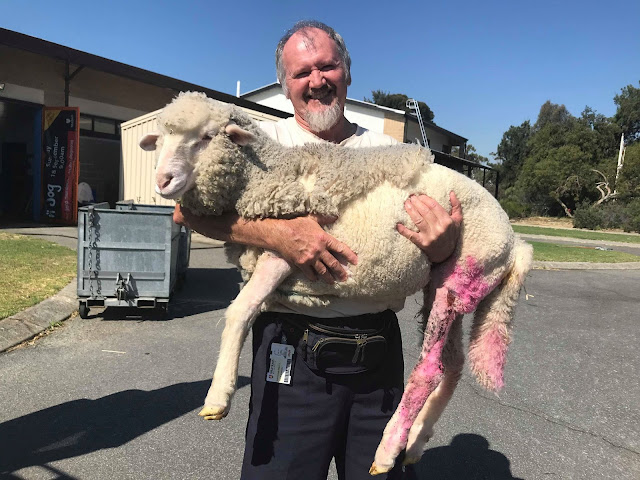 Cleo's first week of treatment was worrying. Her shoulder wound become infected and there was great concern over the ability of the hock on her leg to heal properly, given it was constantly moving. The vets persisted with daily dressings and antibiotics and within a week, progress was noted at both of her serious wound sites. Another breakthrough was Cleo’s behaviour. She was highly cooperative with her dressing changes and treatment visits, working with the vets with incredible enthusiasm. The vet team thought she may need ongoing sedation to facilitate any work on her wounds, but Cleo was happy to lie still on the table, enjoying pats and a cup of treats while the staff worked their magic.

After four weeks, the vets attempted multiple small grafts on her thigh in an effort to hasten healing. Unfortunately, none were very successful, although a week later some areas showed a positive improvement, indicating skin cells had taken and were starting to grow. Through all of this, Cleo cooperated, walking with the technicians through the barn, having chin rubs, cuddles and baa-ing at visitors. We visited whenever possible, tracking her improvement and assuring her that soon she could come home to the Sanctuary. After only six weeks, Cleo’s final dressings were removed. The newly grown skin was fragile and pink, but she was strong enough to leave the clinic. It was a day of excitement both for us and for the many incredible donors that had made her rescue and treatment possible. 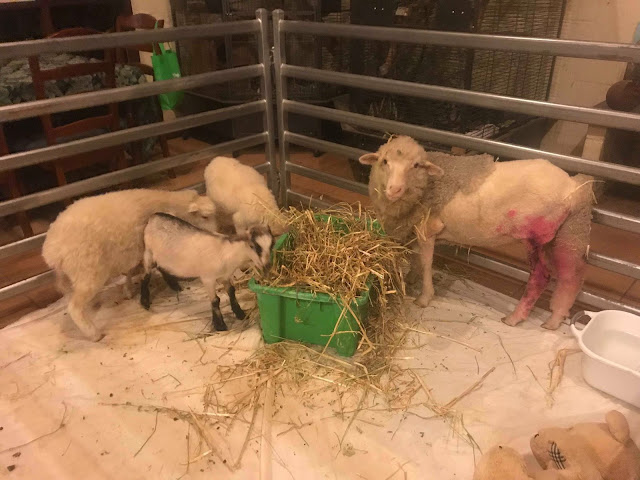 Once home, Cleo spent four weeks in the house where her uncovered leg could be monitored.  Each day, bio-oil was applied to help areas where scar tissue was growing, especially around the bend of her small leg to reduce any mobility issues she may encounter. By the end of November, Cleo joined the special needs flock close by the house. The lambs inspected her with great interest, gathering around and forming a noisy welcome party for this small, half-shorn lamb. She was uncertain of her new ‘family’ at first, sleeping separately for a week despite their repeated efforts to be close to her. 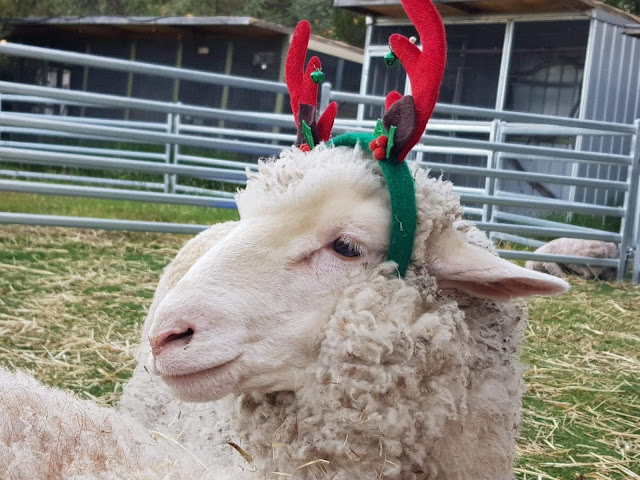 Almost six months on, Cleo has settled well into Sanctuary life. She still prefers the company of humans to sheep and will leave the group for chin rubs each night. Her determination to live and her patience throughout her treatment has been a great inspiration and has taught us the meaning of resilience. Cleo certainly has a strong spirit and huge heart behind her small, gentle appearance. We are so happy to see her ordeal has not impacted at all on her mobility or quality of life and we are so thankful to all the generous people who donated to Cleo's campaign, making her recovery possible. We couldn’t have done it without you.